On 16 May the plenary session of the European Parliament adopted by 623 votes to 33, with 20 abstentions an own-initiative resolution[1] on “Resource efficiency: reducing food waste, improving food safety” proposed by MEP Biljana Borzan.

The MEPs, recognizing that “food is a precious commodity” and “food wastage has high social, economic and environmental costs, as well as ethical consequences”, Call on the European commission and the Member States to reduce food waste of 30% by 2025 and 50% by 2030, as required by the Sustainable Development Goals of the United Nations.

In this resolution the European Parliament clearly expresses the need to establish a hierarchy of actions where prevention is the priority measure, followed by the redistribution of surplus food for human consumption. Indeed, the European Parliament argues that “food chain surpluses should not directly become food waste when they could otherwise be used for human nutrition, and appropriate legislation on food surpluses could enable food waste to become a resource”. For this purpose, MEPs suggest to the European Commission some measures to reduce food waste, such as facilitating food donations. The value of food donations is evident: they help people in need of food who cannot afford to purchase particular food products or a sufficient quantity of food of the same quality while reducing food waste. For this reason, MEPs reaffirmed the value of the activities carried out by "social and bottom-up programmes, such as food banks or eateries operated by charitable organisations, [that] reduce food wastage and help the poorest people, and therefore also help to establish a responsible and aware society”.

Then the resolution calls on Member States to adopt national legislation to restrict the creation of food waste and highlights the leading role of Italy in this field “having adopted legislation that facilitates food donation and distribution for social solidarity purposes by excluding donor liability for food that is donated in good faith and known to be fit for consumption at the time of donation”. In addition, while there is no common EU definition and methodology for measuring surplus food, the resolution “points out that Italy has adopted legislation that defines food chain surpluses and provides a hierarchy for the recovery of surpluses, giving priority to human consumption” and therefore “calls on the Commission to explore the effects of said legislation on food donation and food waste in Italy and to consider proposing similar legislation at EU level if necessary”. Then the resolution “calls on the Commission to explore the possibility and effects of introducing ‘Good Samaritan’ legislation; calls on the Commission to clarify how legislative acts such as Regulation (EC) No 178/2002 and Directive 85/374/EEC regulate liability in food donation”.

Moreover, the resolution calls on the European Commission to propose a change in the VAT Directive that would explicitly authorise tax exemptions on food donations and calls on the Member States to establish voluntary agreements and to create economic and fiscal incentives for donating food and other means of limiting food waste.

Finally, MEPs encourage the European Commission to engage in improving the understanding of ‘use by’ and ‘best before’ dates which generate confusion among consumers and so resulting in food waste.

With this resolution the European Parliament clearly demonstrates its commitment as regards the moral and political obligation to reduce huge quantities of food wasted every year in the European Union, one of the wealthiest and prosperous communities in the world but where 55 million people cannot afford a quality meal every second day. A concrete commitment that strengthens the work of the 326 Food Banks belonging to the Fédération Européenne des Banques Alimentaires which daily operate in 23 European countries.

[1] In the areas where the treaties give the European Parliament the right of initiative, its committees may draw up a report on a subject within its remit and present a motion for a resolution to Parliament. It is important to underline that the own-initiative resolution does not have a legislative but rather political value. 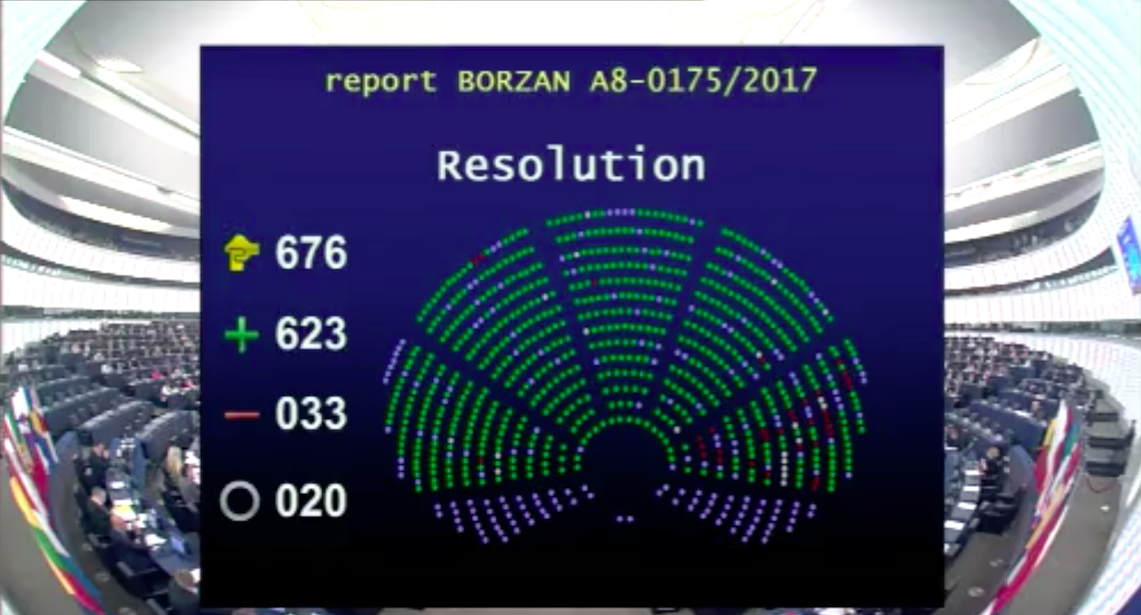